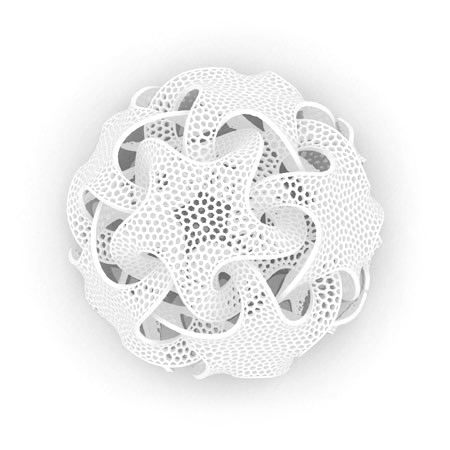 This design marks the culmination of a series of work that has spanned the designer’s sculptural life. This light-sculpture expresses the unity between the four elements of the natural world and the spiritual wholeness of the universe; what the artist likes to refer to as : the Quintrino.

The truly unique aspect of each materialise lamp is that it was created through the use of rapid prototyping technology. This 3-d material printing process allows for an unlimited freedom of design far beyond the capacity of traditional manufacturing processes.

Bathsheba Grossman was born in 1966 in the US. She received a degree in mathematics from Yale (1988), then changed course to art studies at the University of Pennsylvania (1993). She studied sculptural principles and metalworking with Erwin Hauer and Robert Engman, two mathematical sculptors who were both trained by Josef Albers.

After several years’ experience making bronze sculpture by traditional methods, she switched to CAD/CAM in 1998 and began designing sculpture digitally for production by 3D printing. Since then she has been making sculptures using many technologies including lost-wax casting, electroforming, stereolithography, ZCorp printing, and most recently Prometal direct steel printing. Along the way she also started Protoshape, a 3D printing service bureau.

Bathsheba also designs artwork for subsurface laser etching in glass, and in that medium she has created a line of scientific images based in astronomy, molecular biology and mathematics, and a service for imaging protein structures that is used by most major pharmaceutical companies and many research centers. Most recently she designed a museum exhibit for the University of Syracuse, in the form of a laser-etched model of the Milky Way Galaxy, opening December 2004.

Other objects by Bathsheba Grossman