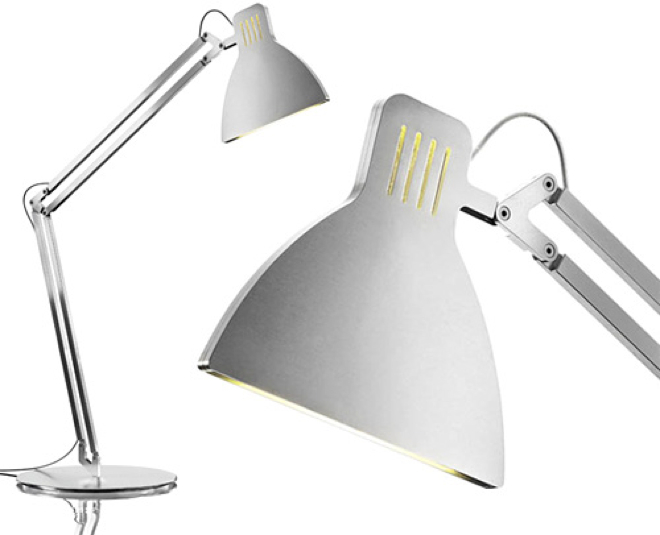 An aluminum and LED desk lamp inspired by the Luxo L1 balanced-arm lamp, designed in 1937 by Jac Jacobson. Only this lamp is barely over 1/4 inch wide.

Stefan Geisbauer originally studied advertising photography in Munich and remained in the industry until 2009. His career as a product designer began with the Looksoflat lamp, a 2010 collaboration with the studio of Ingo Maurer. The lamp was chosen for the permanent collections of the Designmuseo in Helsinki and the Design Museum in London. Geisbauer is interested in the progress of design and acknowledging its history: “While in past centuries the inventions were in decoration and form, our times, beginning with the industrial revolution, are defined by
advances in technology. It is important to remember that today’s classics were yesterday’s new thoughts. They do not spring forward from nothing, but are rooted in what has come before, either as revolution or evolution”

Ingo Maurer founded his lighting design and manufacturing company in 1965. It existed only as a one man workshop called “Design M” when in 1968 he gained enormous success for his Bulb Lamp. As his product line and customer base expanded, he moved the company to its own building in 1972. In the seventies Maurer began making lamps using natural materials inspired by traditional rice paper fans found in Japan. Maurer first showed the YaYaHo low-voltage system in 1984 and received tremendous response. His lamps can be found in the permanent collection sof several museums including the Museum of Modern art. He has been awarded the “Chevalier de arts et des letters” by the French Minister of Culture (1986), a design prize from the City of Munich (1999), the Lucky Strike Designer Award from the Raymound Lowey Foundation (2000), the Collab Design Excellence Award from the Philadelphia Museum of Art (2002), and the Georg Jensen Prize in 2002. He was named the designer of the year in 1997 by the German magazine Architekur & Wohnen.

Other objects by Stefan Geisbauer and Ingo Maurer