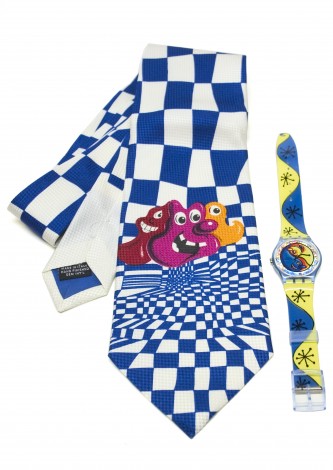 Kenny Scharf, a native to Hollywood, California first came to artistic prominence in the early 1980s in New York, along with artists Keith Haring and Basquiat. Scharf placed his bright imagery, drawn from television and pop culture, on the streets and in nightclubs of the city, helping to nurture a dynamic and freewheeling scene.
Scharf calls his art Pop Surrealism: “Surrealism is about the unconscious, and I feel my work is about the unconscious. The images come from the unconcious except that my unconscious is filled with pop imagery. My unconscious is pop, so therefore the art would be Pop-Surrealism.”
Scharf is a prolific artist who has worked in many media, including painting, printmaking, drawing, sculpture, and film. Also a product designer, he has also conceptualized everything from lifeguard stations, Zippo lighters, watches, cellphones, carpets and carnival carousels.
Scharf has exhibited widely, including the Salvador Dali Museum, St. Petersburg, Bienalle de Sao Paolo, Brazil, Tony Shafrazi Gallery and Queens Museum of Art, New York, Museum of Contemporary Art, Monterrey, and the Ft. Lauderdale Museum of Art.

Other objects by Kenny Scharf