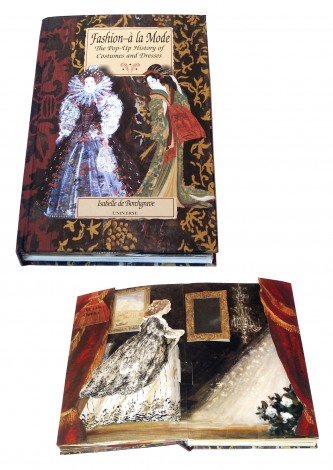 Fashion a la Mode: The Pop-Up History of Costumes and Dresses

This pop-up book illustrates the history of fashion with traditional pop-up paper engineering in addition to paper dolls, fans, and other interactive elements.

At only four years old, Isabelle de Borchgrave began painting. She went on to study at the Brussels Academy in the mid-1960’s. Isabelle established her own studio, Creations Isabelle de Borchgrave, in 1983. Her variety of professional included hand-painted fabrics, commissioned murals, furniture, ceramics, lighting, and work on large canvases.
Isabelle is inspired by natural scene such as gardens and seascapes. In some instances she paints gardens that she has designed at her home in Brussels. Other inspirations included oriental architecture, tapestry, and porcelain patterns.
Dorthy Twining Globus is the Director of the Museum at the Fashion Institute of Technology in New York City.