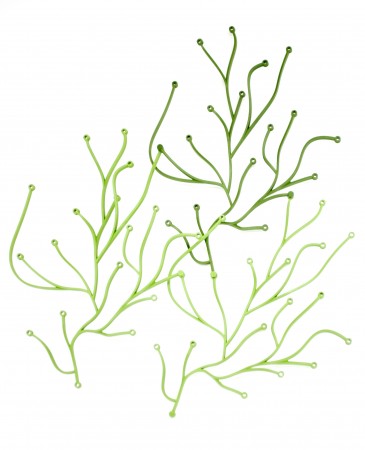 Shapes from the world of vegetation serve as inspiration for Ronan & Erwan Bouroullec’s new Vegetal chair, as they did for Algues. Its plant-like structure made of polyamide dyed throughout goes to the limits of the technically feasible, and the six colours (unusual for plastic chairs) emphasise the link to nature. Vegetal is stacking and suitable for indoor or outdoor use.

In 1997, they presented their Disintegrated Kitchen at the Salon du Meuble in Paris and were spotted by Giulio Cappellini, who gave them their first industrial design projects, notably the Lit clos (“Closed Bed”) and the Spring Chair. In 2000, Issey Miyake asked them to design a space for his new collection of A-Poc clothes in Paris. Then, the decisive meeting with chairman of Vitra Rolf Fehlbaum occurred which resulted in their conception of a new kind of office system, Joyn, in 2002. This was the beginning of a special partnership which has borne fruit in numerous projects, including Algues, the Alcove Sofa, the Worknest, the Slow Chair, the Vegetal or L’Oiseau. Since 2004, the Bouroullecs have also been working with Magis, for whom they have designed two complete furniture collections, Striped and Steelwood as well as additional projects such as the Pila chair, the Pilo table, the Central and Tambour tables. They have worked on several types of textile wall systems, such as the North Tiles and the Clouds, in close collaboration with the Kvadrat brand with whom they also developed the Ready Made Curtain that launched in early 2013. In 2010, they debut two new collections for two new European editors: Ovale, a complete tableware collection for Alessi and Axor Bouroullec, a comprehensive collection for the bathroom area for Axor Hansgrohe. Since 2011, they have been extended their array of partners and design the Piani and Aim lamps for Flos, the Losanges rug for Nani Marquina, the Osso chair for Mattiazzi, a collection of indoor/outdoor ceramic for Mutina as well as a collection for Hay to furnish the new University of Copenhagen in 2013.

Other objects by Ronan and Erwan Bouroullec