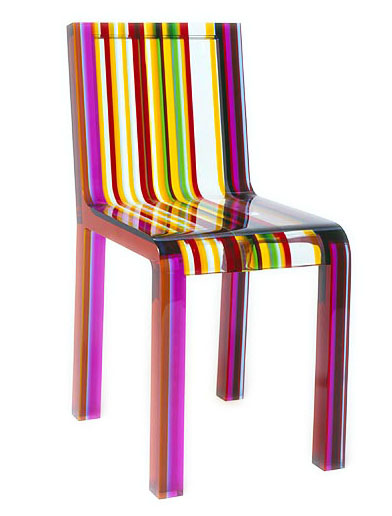 The rainbow chair designed by patrick norguet for cappellini in 2000. Combining traditional materials like wood with more modern materials such as plastics and metals, Norguet creates unique designs which look especially striking in a contemporary environment. The Rainbowchair is a brightly colored chair manufactured entirely of acrylic resin plates of different colors and thicknesses. The plates are joined together with ultrasound.

Born in 1969, in France, Norguet has had a tremendous career in just a few short years. Beginning as head of merchandising at Louis Vuitton, Norguet was initially ‘discovered’ by Guilio Cappellini. Norguets’s Rainbow Chair was quickly followed by the Rive Droite series, which received enormous acclaim not only from a design standpoint, but also from the availability of an Emilio Pucci fabric. Norguet has since worked with Artifort, which produced a number of Paulin-esque pieces. His cork is currently in the permanent collection of the Museum of Modern Art, New York.

Other objects by Patrick Norguet