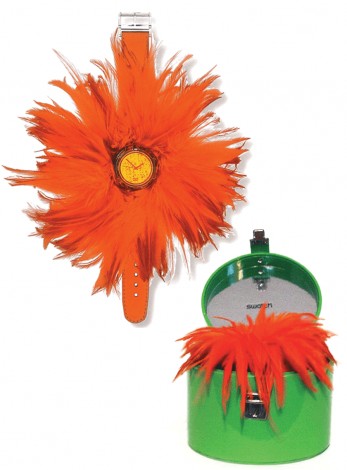 This is a Pop Swatch special watch with orange feathers and a yellow dial. It comes packaged in a small green beauty case.

Born in Munich, Germany, Moshammer had an education in retail industry trading. He began to design fashion in the 1960s. His base of existence was his boutique “Carnaval de Venise” in Munich’s high society street, Maximilianstraße. There he created fashion for wealthy men from furs, cashmere, and silk. With this strategy he attracted the high society of Munich and Germany. His international clients included: Governor Arnold Schwarzenegger, Prince Johannes von Thurn und Taxis, actor Richard Chamberlain, King Carl XVI Gustaf of Sweden, star tenor José Carreras, magicians Siegfried and Roy, and German media personality Thomas Gottschalk.

Moshammer was an eccentric and iridescent personality. He was well-known for carrying his Yorkshire Terrier dog Daisy in public wherever he went, and even wrote a book about her. Daisy was Moshammer’s darling, his trademark and his constant companion.

Moshammer was one of Germany’s most successful fashion designers after Karl Lagerfeld and Wolfgang Joop. Furthermore, he committed his wealth to helping homeless people.

Other objects by Rudolph Moshammer