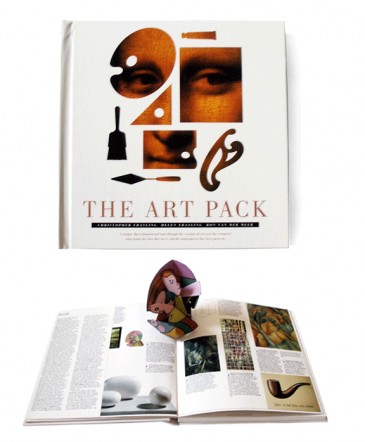 Educational book with pop-ups, pullouts, and mobiles of fine art. Also included is an audiotape with art commentary.

Professor Christopher Frayling is very well known academician in the UK. He is the Rector for the Royal College of Art in London. Christopher is also Professor of Cultural History at the College. Outside the RCA, he is well-known as an historian, critic and an award-winning broadcaster, with his work appearing regularly on radio and television. He has published thirteen books and numerous articles on popular culture, design and the history of ideas, the most recent being a biography of the Italian film-maker Sergio Leone. This lastest book’s popluarity caught the attention of the BBC, who asked him to turn the publication into a documentary.
He is a trustee of the Victoria and Albert Museum and the Design Museum, and was until recently a member of the Arts Council of England. In the 1980s Frayling was a governor of the British Film Institute and a member of the Crafts Council. He is currently Chairman of the Design Council, where he pushes for an emphasis on design in business and design in education. He is also Chairman of the Royal Mint Advisory Committee and a member of the Arts and Humanities Research Board.
Christopher was knighted for “services to art and design education” in January 2001.

Ron van der Meer is a pioneer of the modern pop-up book and has published more than 150 books, including over 100 pop-ups. His best-known pop-ups include The Art Pack, The Kid’s Art Pack, The Math Pack, and Monster Island. He has also sold more than 2 million greeting cards. He lives in Berkshire, England.